Hops.  Originating in China, they are used around the world for medicine and of course, beer.  They are used for aroma. flavour and for natural preservation.  These cones help balance the malt and bitterness while imparting aroma to the beer and adding their own flavours.

This past Wednesday the Barley's Angels learned all about these wonderful plants at the "Hop into Summer" event.  Our host, Kichesippi Brewery opened their doors and event space to 40 women so they could listen to Nickel Brook's/Clocktower's Justin Da Silva talk about hops. 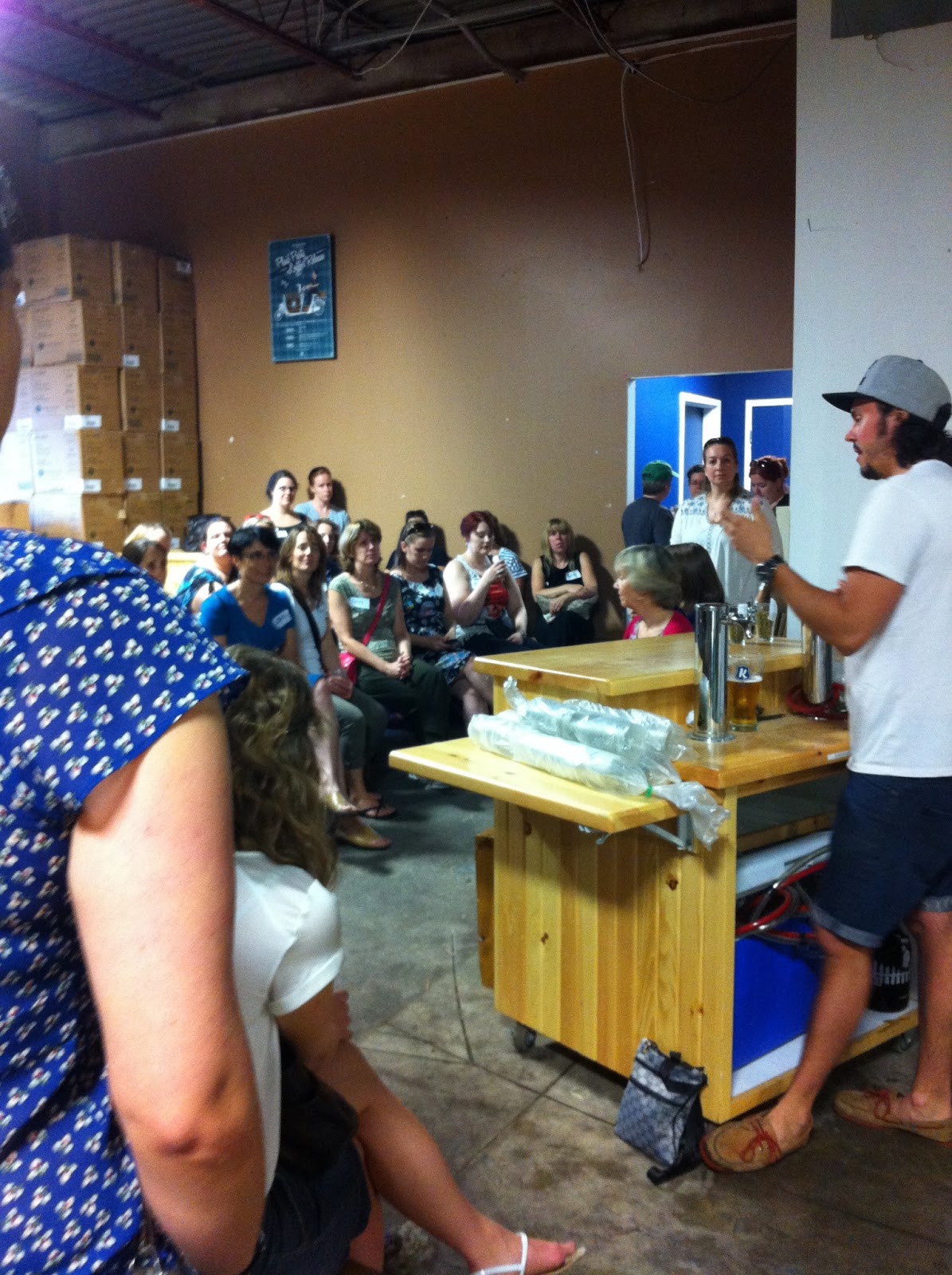 Justin brought a few varieties in pellet form for the women to smell. He explained the difference between aroma hops-those that have low bittering but high aroma and bittering hops-those with high bittering and low aroma. Hops take on the characteristics of the terroir they grow in.  Each variety, each cultivar brings something different to the table.  A brewer decides what hops they will use based on the profile they want the beer to have.

The ladies passed around glasses filled with pellets, sniffing and discussing what they could smell.  Justin explained the common terms such as citrus, spicy, grassy and many others. 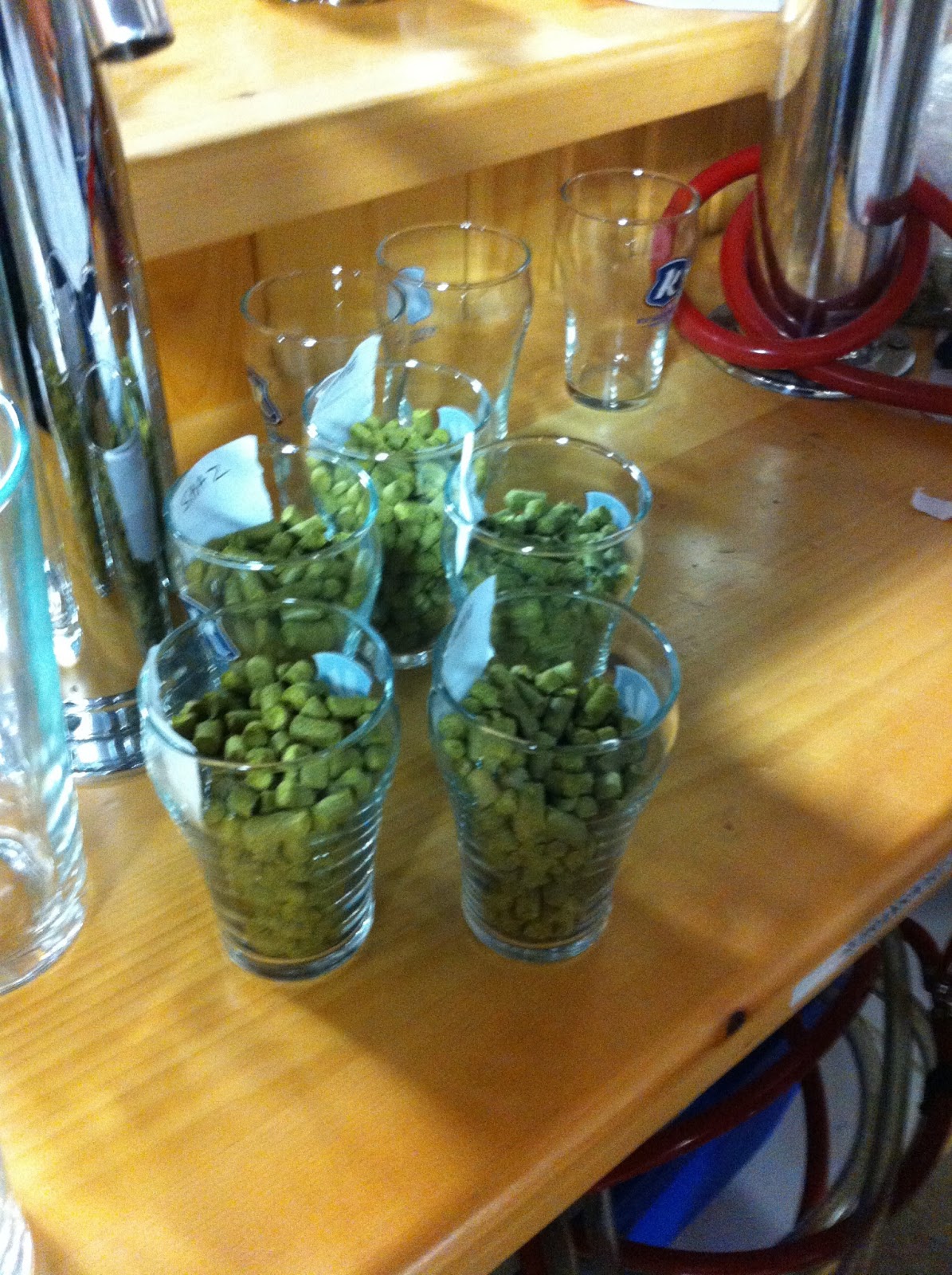 Smelling wasn't the only thing on the agenda though.  One can talk about hops and aroma but the best way to experience them is of course by trying some beer. 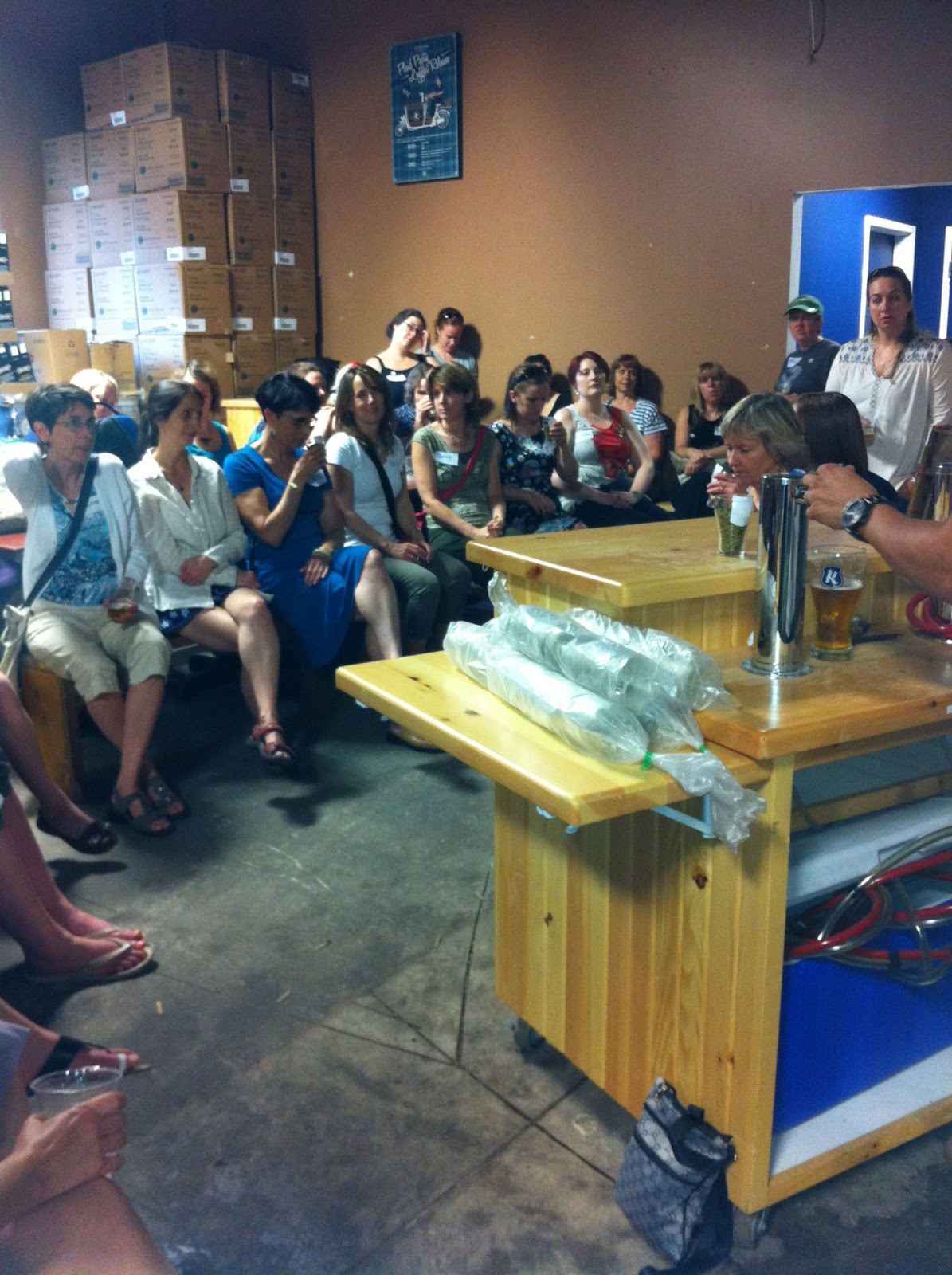 First up was Nickel Brook's Naughty Neighbour APA.  Notes of citrus and pine on the nose and the beer left a light bitter taste on the palate.  A great starter beer to introduce how hops are used in beer.

Next up was Nickel Brook's Headstock IPA.  This beer was a bit more hop forward than the Naughty.  The malts brought out a nice balance.

Going up in terms of hoppiness our next beer was Muskoka's Mad Tom.  This beer is dry hopped with Chinook and Centennial making it a a bit more bitter to the palate but still well balanced so as not to turn a beer lover off.

Moving up the I.B.U. scale we moved onto Twice as Mad Tom, also from Muskoka. This beer is dry hopped twice, packing it with a lot of flavour and aroma.  Immediately the smell of lemon and a hint of floral was apparent.  After being told how much hop was in the beer many were pleased to find the bitterness to be well balanced and not overwhelming.  It was an example how you should be able to taste all the sublties hops brings to a beer.

Our next beer was Beyond the Pale's Hop on Your Face.  This beer is packed with Centennial (given to them by Muskoka) Simcoe and Amarillo hops.  This beer poured a lovely rich amberish colour and carried lemon and a hint of pine on the nose.  The flavours were cirtus and pine.

Our last hop forward beer was Nickel Brook's Immodest IPA. There was no mistaking the Simcoe and Citra hops in this beer.  This beer packs a big aroma, a great taste and a big 9.5% ABV. The malt blended with the citrus and pine on the palate leaving it sweet but not cloying. The hops left a nice lingering bitterness on the palate.

To end the night off Justin served up some Kichesippi Blonde from our hosts. In the blonde, the hops lend it a very mild bitterness but a hint of citrus on the nose. Its flavours were far more subtle than those of an IPA but that is what you want from a good blonde beer.

The event was a huge success.  There was lots of sniffing, discussing and tasting, the way a beer event should be.

Special thanks to Beyond the Pale, Muskoka, Kichesippi and Nickel Brook for all the beer we were able to taste.  A big thank you to Justin Da Silva for giving such an informative talk.
Posted by April at 11:28 PM